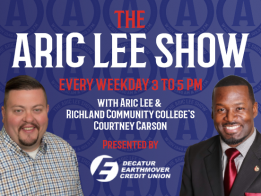 AUGUST 28  –  The WSOY Broadcast Schedule returns to a bit of normalcy since the beginning of the coronavirus pandemic, as ‘The Aric Lee Show’ returns to WSOY 1340 AM/103.3 FM and NowDecatur.com, on Monday, August 31st, from 3 to 5 p.m.

In late March with so much uncertainty involved with local businesses during the COVID-19 outbreak, Lee’s show went on a four-month hiatus, as his role changed within Neuhoff Media for the summer. A return to the air was expected, and that new beginning comes on Monday.

“It’s been a long, quiet summer for me, and I’m excited to get back where I feel most comfortable,” Lee said. “It’s my 13th year on the air, but we’ve got some changes I’m excited about, and I think friends of the show will really enjoy what we bring to the afternoon landscape. We get to bookend every weekday with local programming, which starts in the morning with the legendary ‘Byers and Company’.”

Lee has hosted his own talk show within the Neuhoff Decatur family since April of 2008, when, ‘The Aric Lee Show’ debuted as a sports talk show on WDZ 1050 AM. A shift was made in March of 2018, as the show shuffled to WSOY, changing from a solid sports talk show, to a community-based talk show, highlighting the people, events, and work of the Decatur area. Lee has also been a play-by-play voice of high school football and basketball since 2006, and of Millikin athletics since the fall of 2016.

Monday will mark Lee’s 729th show on WSOY, but this one will feature some new beginnings.

Decatur’s Rev. Courtney Carson joins the show as the permanent cohost. Carson is the Executive Director of External Affairs for Richland Community College, where he is the Co-creator of the award-winning Trauma Sensitive Training Program known as EnRich. He’s also the Vice President of the Decatur Public Schools District #61 School Board, and an ordained Minister at Antioch M.B. Church.

“Over the last handful of years I’ve watched Courtney become a hero to this community for what he aims to do daily, improving the lives of our community’s youth,” Lee said. “But when it comes to radio life, it also helps that I knew Courtney as a ball-hogging 14-year basketball player, who went through a number of life lessons, before coming out on this other side of life as a minister, face of the community, and incredible family man.

“I can’t wait to range from serious conversations about the world we live in, while finding plenty of time to laugh at ourselves.”

Lee and Carson will be joined by daily producer Dominique Bates-Smith. Bates-Smith is a Maroa-Forsyth High School, Richland Community College, and Millikin University graduate, and has been with Neuhoff Media since 2015.

The show has also adopted a presenting sponsor for the relaunch as Decatur Earthmover Credit Union enters, along with a number of other sponsors helping kick the show back off.

‘The Aric Lee Show with Richland Community College’s Courtney Carson, presented by Earthmover Credit Union’ will serve as the longform name of the show, and will be available hourly via podcast, along with each individual guest interview uploaded to NowDecatur.com, and shared on the NowDecatur Facebook and Twitter pages.