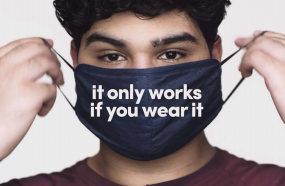 August 3, 2020 – Governor JB Pritzker launched a new $5 million awareness campaign to encourage Illinois residents to wear a face covering every time they’re in public.  The campaign plans to use local information to advertise on broadcast and cable television, radio, billboards and social media to the communities with the greatest risk from COVID-19.

The Governor launched the campaign from the State Emergency Operations Center in Springfield. As of Friday, 11 counties have now reached IDPH’s “warning level” for virus spread, including Sangamon County.

“I’m proud to launch a new public awareness campaign today that has a straightforward message for Illinoisans: A mask is like anything that keeps us safe. It only works if you wear it,” said Governor JB Pritzker. “We’ve made so much progress since the beginning of this pandemic. Let’s protect that progress. This is our moment to pull together as families, friends and neighbors. We’re all safer and stronger when we go all in, Illinois.”

“This campaign connects the dots between daily actions we take to keep ourselves safe and one the best things we can do to fight COVID-19: wearing a mask,” said IDPH Director Dr. Ngozi Ezike. When you get in a car, you buckle your seatbelt to protect yourself in case you get into an accident. When you play football or ride your bike, you put on a helmet to reduce your risk of seriously injuring your head or brain. When you’re on the water, you put on a life jacket so you don’t drown. And when you’re in the bedroom, you use a condom to protect against STIs. A mask is no different. It only works when you wear it.”

“Governor Pritzker, Dr. Ezike and I spend each and every day poring over the numbers, making decisions to keep people safe and planning for what’s ahead,” said IEMA Director Alicia Tate-Nadeau.”If we continue on the track we’re on, we’ll need to look at bringing back some restrictions that we’ve seen over the last few months. Nobody wants that. We haven’t seen enough people wearing face coverings and following the rule we put in place on May 1. If more people do their part by wearing a mask in public, we can move forward, not backward. Let’s go all in, Illinois.”

Governor Pritzker introduced Illinois’ mask-wearing requirement on May 1, the same day Illinois moved into Phase 2, and called for a national mask mandate during testimony before the U.S. House of Representatives on July 8.

The campaign reminds Illinoisans that wearing a mask is just like wearing a seatbelt, a helmet or lifejacket, tools used every day to prevent serious injury or even death. Research has found that highlighting these commonsense comparisons is the most effective messaging to change behavior and increase mask usage. Research also demonstrates that wearing a face covering is one of the most effective ways of decreasing the spread of the virus, and new research indicates it could also provide important protection to the wearer.