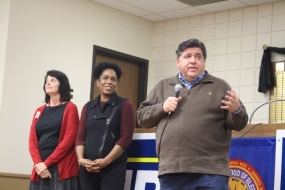 August 1, 2020 – Gov. J.B. Pritzker’s administration urged additional vigilance by local officials in 11 counties where there are upticks in COVID-19 cases.

The Illinois Department of Public Health reported there are 11 counties in “warning level” status because of the spread of the coronavirus, which causes the highly contagious and potentially lethal COVID-19. Online data shows there are 13.

The health department uses a variety of indicators to determine warning-level status, including increased new infections per 100,000 people, a 20% increase in deaths two weeks in a row, availability of intensive care units in hospitals, hospital admissions and more. An area hits warning level by surpassing at least two indicators.

Public health officials reported 1,941 new cases in the state Thursday, the first time the daily number has topped 1,900 since April 27, during the height of the initial outbreak. In the 145 consecutive days since March 9 that Public Health has reported new cases, there have been only 27 days when more new infections were recorded.

With declining numbers in June, Pritzker ushered the state into the fourth phase of a five-part Restore Illinois plan which gradually loosens restrictions on social interaction. The governor has warned that regions of the state where the outbreak spikes will see what he calls “surge mitigation,” or the restoration of restrictions which, during the initial outbreak last spring, included closing bars and restaurants, limiting groups to no more than 10, and even requiring people to stay at home unless departure is essential.

In the meantime, Pritzker pointed to swift action taken in some of the warning-level counties. Springfield Mayor Jim Langfelder issued an executive order Friday outlining stringent rules for restaurant dining, including fines for employees not wearing face coverings to discourage transmission of the virus. Visitation at Perry County hospitals and nursing homes has been suspended. In Jackson County, the state’s attorney has authorized enforcement of COVID-19 precautions at restaurants and bars through the local ordinance governing the preparation and serving of food.

Overall, the state has witnessed 7,495 deaths among 178,837 confirmed cases. In most instances, those who contracted the illness have recovered. But experts believe that the true number of infections is much higher because not everyone has been tested for the virus and not everyone who contracts it displays symptoms.