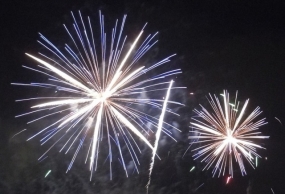 Sen. Chapin Rose has attempted to get a bill passed on more than one occasion, but can’t get Democrats to come on board.

“With the massive decline in state revenues due to the COVID, this would be an easy way to pick up some sales tax dollars and put some people to work in our state and they are just not interested,” Rose said.

Despite being illegal, Rose said fireworks already are here and the state is simply losing tax revenue to surrounding states that sell them. He estimates the state would bring in about $10 million a year in sales tax revenue.

Fire safety groups across the state are opposing any sort of legislation to legalize fireworks, something they said they already result in a number of injuries.

The risk of misusing fireworks is real. According to the Illinois State Fire Marshall, there is an average of 18,000 fires caused by the improper use of fireworks every year.

Fireworks have been banned in Illinois since 1935 under what was dubbed the Fireworks Regulation Act.

Fireworks retailers in communities in other states near Illinois’ borders often report numerous Illinois license plates in their parking lots.