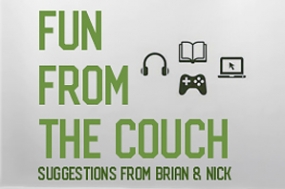 With everyone being required to spend more time at home, it may be helpful to know about some things to do to occupy the time. The Byers & Co. crew are compiling fun things to do from your couch! If you have any recommendations of books, shows, movies, games, music, digital experiences or anything else that may be fun from the safety of your home, please let us know!

(links open to external sites, new items added at the top of each category)