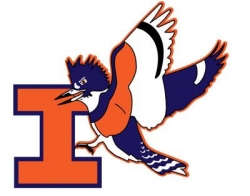 March 10th, 2020 – University of Illinois students have voted in favor of adopting a new mascot for the University. The female Belted Kingfisher, a blue and white bird with orange mixed in, was voted on in a non-binding referendum as a preliminary proposal to adopt the new mascot. The referendum is not intended to change the name of the “Fighting Illini,” but instead to replace the mascot (Chief Illiniwek) by the NCAA in 2005. The vote passed by a 4,222 to 3,597 margin in favor of the bird. The referendum now goes to University Administration for a decision. According to Robin Kaler, the spokesperson for the University of Illinois Chancellor Robert Jones, there are no plans to choose a mascot at this time.