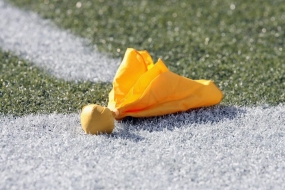 NOVEMBER 11  –  Saturday was a rocky road for a trio of NowDecatur coverage area high school football teams, as the Mt. Zion Braves, Maroa-Forsyth Trojans, and Argenta-Oreana Bombers fell short in the second round of the IHSA Playoffs.

The dream of the big match-up fell one team short between Maroa-Forsyth and St. Teresa, after the Trojans (9-2) hit the road for a rematch with Auburn (8-3), and fell just short, driving to win in the closing moments, 16-14. St. Teresa (10-1) also had a rematch, back to Week Four against Tuscola (8-3), but had little trouble advancing to the elite eight round, with the 63-20 victory over the Warriors. St. Teresa will now follow Maroa-Forsyth, on the road to Auburn, to play the other Trojans, to try to advance to the state semifinals.

Mt. Zion (10-1) closed their season in Joliet, against the Hilltoppers of Joliet Catholic (8-3). The Braves trailed 27-0 at halftime, but shutout Joliet in the second half, and scored twice in the fourth quarter, to fall 27-14. The Braves did have a drive stall close to the goalline, and missed a pair of field goals, courtesy of the windy afternoon, proving Mt. Zion kept the fight alive all day long.

In the 1A south bracket, Central A&M (11-0) coasted to the victory over the Fisher Bunnies (8-3), leading 35-0 early, and finishing the running-clock performance winning, 69-34. Another all-local postseason match-up dream was shattered in the 1A bracket, as Argenta-Oreana’s fourth-quarter-rally one-eighty’d, and Carrollton (9-2) would win it, 48-35.

The Bombers (9-2) led 21-20 from the three-minute mark of the second quarter until just under nine minutes to play in the game, when the Hawks scored, recovered a fumbled kickoff return by the Bombers, and a few plays later scored again to take a 34-21 lead. But Argenta-Oreana answered with a touchdown drive that included a pair of fourth down conversions, before quarterback Josh Williams, busted loose for a 37-yard touchdown run. Makail Stanley then won a footrace to the ball as the Bombers recovered the onside kick, picked up a could first downs. Stalled out on fourth down. held a few plays defensively, got a Dirk Buhlig interception, and a few plays later, saw Williams break free again for a 33-yard score, and the sudden 35-34 lead.

But the gas tank appeared empty and in the closing minutes, not only did Carrollton drive down for the go-ahead score, they sacked Williams on the closing drive with seconds remaining, forcing a fumble that turned into a scoop-and-score, to make-up the two-score victory.

Below are the capsules of the final two NowDecatur programs, including games within our extended coverage area.

Game Information – Kickoff is scheduled for 1:30 p.m. at Mark Ramsey Field in Moweaqua

Records – The Raiders are 11-0, and finished 7-0 as the outright Central Illinois Conference Champions … The Purple Riders are 9-2, and finished 6-1 in second place of the Lincoln Prairie Conference

The Winner’s Next Game – (7) Carrollton (9-2) at (6) Athens (9-2) … if the Raiders advance, they will travel to the winner of Carrollton/Athens in the state semifinals