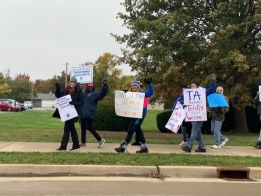 October 31, 2019 – Members of the Decatur Federation of Teaching Assistants will return to the classroom tomorrow without a contract.  DFTA made the announcement today that they will suspend their strike .  DFTA says they have requested additional bargaining dates with the DPS Board of Education through their mediator.

In the statement, DFTA President Paula Busboom said they were notified that their health insurance would be cancelled if they did not return to work. “It’s fitting that on Halloween, they pull this trick,” said Busboom. “They’re trying to hit us where it hurts and take away exactly what we’re fighting to keep.”

According to DPS, All programs that had been suspended will resume normal operations and schedules on Friday, November 1.