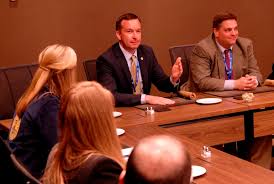 April 17, 2019 – Two local lawmakers want to offer a tax credit for people whose homes were damaged by tornadoes last year. Currently FEMA uses a formula to figure out how much damage a county has to see from a tornado or flood or other natural disasters before the federal government will extend aid. Part of that equation is state population, something that results in Central Illinois losing out due to the population of Chicago. State Sen. Andy Manar’s bill would allow for residents who had tornado damage in 2018 to get a discount on their state taxes. According to Manar. the bill allows up to a $750 natural disaster tax credit in the tax year 2019, just for one year. State Sen. Chapin Rose said the formula should be changed to help families outside of the Chicago area when disaster strikes. The bill is now in the House of Representatives awaiting a committee assignment.