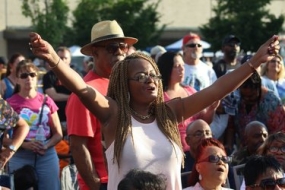 April 1, 2019 – The Decatur Celebration has announced the show will go on.

Today, the Celebration announced a new revitalization effort as well as a part time producer.  President of the Decatur Celebration Board of Directors, Claudette Davis, said the celebration board has been meeting diligently with volunteers and supports to decide if the celebration had reached it’s shelf life, and if not, how to keep the party going.  The consensus has been that the event is a staple for the Decatur community and Davis stressed it will take everyone’s support.

The Board of Directors has hired Jarrod Cox as part time producer for the 34th annual event that will take place August 2nd, 3rd and 4th in downtown Decatur.  Cox will still retain his role at the Decatur Convention and Visitors Bureau.

The committee will not be permanent and is only serving to oversee the transition as Cox takes the helm. Kaylor said some of the priorities of the committee are to improve the lines of communication and to develop a time line for the event.  Kaylor acknowledged the uphill battle to organize the event but said Decatur is known for “making things happen”.   Specifically, the committee is asking help from stakeholders and community members to keep the party going.  At this time, the committee is working on specific sponsor asks, but said sponsorship will be key.  In addition, volunteers will continue to be crucial.

As for fundraisers, the French Fried 5K will not be returning this year, however Kaylor hinted at the possibility of some new fundraising opportunities as well as a possible return of the King and Queen contest.

Entertainment for the Celebration is expected to be announced later this Spring.

Interested sponsors and volunteers for the 34th Annual Decatur Celebration are encouraged to contact the Celebration office.