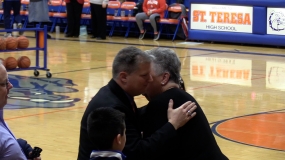 January 29,2019 – St Teresa High School has honored a former head basketball coach by naming the court in his honor. “The Bill Ipsen Court” was named was last night during the halftime of the senior girls basketball game.

This naming opportunity was made possible by a generous gift from Jack, Class of 1955, and Barb McCoy.

“Bill is the only basketball coach at St. Teresa High School to bring home a State Championship and he is more than deserving to have the court named after him in the Joe Venturi Gymnasium,” stated McCoy.