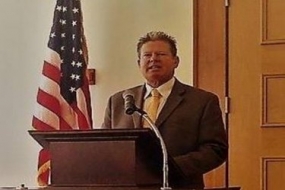 Underwood’s full statement is below.

“We acknowledge that it is well within Lt. Jim Root’s right to try and contest the certified results in court. That being said, we are extremely disappointed that Lt. Root and his attorney have chosen to mischaracterize the results of last weeks’ discovery recount in an effort to confuse the public. The fact is Lt. Root and his legal team hand-selected 18 precincts to recount that were most favorable to him and when all the eligible ballots were recounted in those precincts, Sheriff Brown was still the winner. We strongly disagree with the suggestion that there are two valid and uncounted ballots that change the result of this election, as well as the idea that the lawfully certified outcome can be overturned by any entity but the judiciary. Making inaccurate statements and misleading the voters will not change the results of this race.

It is Lt. Root’s responsibility to contest this election as well provide evidence that the election results as certified by the County Clerk were wrong. For Lt. Root to suggest that Sheriff Brown join him in this effort makes no rational or legal sense.

The Macon County Democratic Party would respectfully request that Lt. Root and his legal representatives allow the judicial process to work and refrain from making any further statements about this case until all of the evidence and facts are presented in a court of law. Politicizing this matter any further will not change the results of this race.

We have faith in the process and strongly believe that once all of the evidence has been brought forward that Sheriff Brown will continue to serve as the Sheriff of Macon County.”