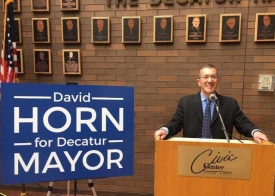 “In short, I care about the City of Decatur,” said Horn, a biology professor at Millikin University since 2005.

“I am concerned that our population has declined 5 percent since 2010. I am concerned we have a 25 percent poverty rate in the city, and I think I can make a strong difference as mayor.”

“My focus is going to be on making the city more livable, more vibrant and more healthy,” said Horn. “I think that we can do that through neighborhood revitalization, creation of more equitable relationships, creating a healthy environment in which we live, and reducing local government barriers to growth.”

In a media release, Horn touted himself as “an independent voice” focused on evidence-based and data-driven solutions and “a strong proponent for fiscal responsibility, community revitalization and environmental stewardship.” In his support for the revitalization effort, he has stressed “a need for urgency” in regard to houses on the demolition list.

Horn admitted the city has seen some degree of progress in recent years.

“I think there are some positive things that are occurring in Decatur, and manufacturing job growth, particularly at Caterpillar, is definitely one area where we’ve had some growth,” he said.

“I think one of the things I would do as mayor would be to work collaboratively with industry, with small business, and with organizations to remove barriers that there are to further job creation and growing the economy.”

Horn has shown a willingness to dissent during his time on the Council. Last month, he voted against allowing sandwich board advertising signs on downtown sidewalks. In August, he railed against “the many negative impacts of gambling” as the Council mulled raising the fees for video gaming terminals.

Regardless of the outcome of the mayoral race, Horn says he will continue as a community advocate.

“No matter what, I’ve got two more years on the Council and I look forward to being a public servant for the citizens of Decatur,” he said.