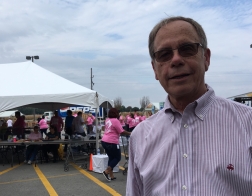 October 5 – John Skeffington marveled at the efficiency of the 17th annual WSOY Community Food Drive on Friday, heaping credit on those donating their time.

“It’s very impressive, and it’s because of the volunteers,” said Skeffington, the President and CEO of Skeff Distributing. “Many of them have been around for a long time. This is kind of a well-oiled machine.

“People are coming in and they spend no time here before somebody’s taking their donations or taking food off their trucks. It’s all incredibly well-orchestrated.”

The collection of non-perishable food items and monetary donations runs until 6 p.m. at the Kroger grocery store on U.S. 36 in Decatur. The goal is to top last year’s record of 1.52 million pounds of donations over 12 hours.

Skeff Distributing has been one of the sponsors of the annual fundraiser from the very beginning. On top of the $1,000 sponsorship donation, Skeff brought in more than 850 pounds of food as part of a supplemental contribution of $1,300.

“Decatur is an incredibly giving community, always has been in good times and bad,” said Skeffington. “The good thing is Decatur is coming back.”