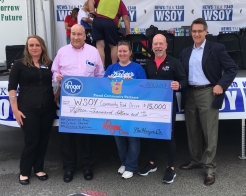 October 5 – Kroger enjoys getting the opportunity to play a big role in the annual WSOY Community Food Drive, with the store on East U.S. 36 serving as the host location.

“This is such a terrific local event,” said Kroger spokesman Eric Halvorson. “The people here 17 years ago were part of it when the program began, and we’ve tried to grow with the Food Drive. It’s such a tremendous expression of generosity on the part of the people of Decatur.”

Halvorson said helping provide food for those in need fits in with the company’s goals.

“Kroger has a program called “Zero Hunger, Zero Waste” and we are expanding our commitment to hunger relief around the country,” he said. “It’s a natural partnership for us to be part of this and expand as the food drive does.”

Kroger presented a donation totaling $15,000 to the Food Drive, with three equal contributions going to Catholic Charities, the Salvation Army, and Crossing Healthcare for its prescription produce program.

“We think it’s such a tremendous addition to the lifestyle and promoting healthy living for the people who are being served,” said Halvorson. “We wanted to make that one additional piece of our donation today.”

Halvorson said he would like to see the success of the WSOY Community Food Drive inspire similar charitable action in other Kroger communities.

“This is such a big deal in Decatur, I would like to see if maybe some of the radio stations in Indianapolis could pick up on it,” he said. “I wouldn’t be surprised if people see how much you guys have improved life here in Decatur that they could be inspired by your achievements to do something similar.”