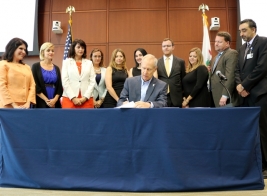 August 22 – A plan to make health care available to more rural children and families through telehealth was signed into law Wednesday by Gov. Bruce Rauner.

The measure, sponsored by State Sen. Andy Manar and State Rep. Sue Scherer, expand access to telehealth behavioral services for rural, underserved and disadvantaged patients throughout the state. It also allows health care providers on both ends of a telehealth interaction to be reimbursed for costs involved

“Children and families shouldn’t go without medical treatment or counseling – nor should they have to drive three hours for services they – need simply because of where they live,” Manar said in a media release. “We have other options today. Telemedicine is one of them.”

In a separate media release by Hospital Sisters Health System, Dr. Gurpreet Mander thanked Manar and Scherer for their partnership in passing the bill

“We are thrilled to see this measure signed into law today by Gov. Rauner, as we know it will continue to expand the services we can provide through telehealth,” said Mander, chief medical officer at HSHS St. John’s Hospital in Springfield and executive director of the Illinois Telehealth Network.

The lack of mental health care in rural Illinois and a strong desire for expanded telemedicine services were common themes during discussions on Manar’s tour of hospitals and federally qualified health clinics in his Senate district in November.

“This plan begins to solve a problem in central and southern Illinois by breaking down a significant barrier to mental health care, which is access,” Manar said. “By chipping away at some of Illinois’ outdated regulations, we can help families begin to get more of the help they need in a timely manner closer to home for a fraction of the cost.”

Prior to the passage of the legislation, Illinois laws and regulations limited telehealth use and reimbursement, especially for those insured by Medicaid.

The bill was one of five signed by Rauner as part of a mental health package during a ceremony Wednesday in Springfield.