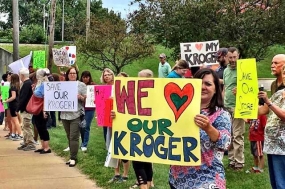 August 7 – A crowd of over 50 people braved the threat of rain to line Route 48 east of Fairview Plaza Tuesday evening to rally support for “their neighborhood grocery store”.

Less than a week ago, Kroger’s Central Division announced that the Fairview Plaza store would be closing at the end of the month. The company said they had hoped the store could return to profitability, however had determined it was no longer realistic to continue to operate the location. The company praised the employees and said human resources would strive to find them positions at the other 3 Kroger locations in Decatur.

Residents in the western part of the city that frequent the store have been dismayed at the announcement of the stores closure, and showed their desire for the company to keep the store opening by organizing a “Save Our Store Rally” Tuesday evening.

One of the rally organizers and frequent shopper, Abi McIntosh said she was shocked when she found out store was closing. After living in the country, she said she enjoyed the convenience of having to drive less than 5 minutes to get food, and while she could drive farther, she said other people can’t.

McIntosh said there seems to be measures the company could have implemented before closing. Things such as limiting the stores’ hours and putting in better security measures. She says things that would be more viable than closing the store altogether.

With the rally, McIntosh says she hopes the company sees that the store is valued and appreciated and frequented by many people and that they hear that the community is crying out, that they want a store here and they want to keep Kroger here.

The Kroger location is one of the original tenants of Fairview Plaza.