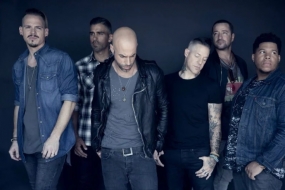 August 5 – Rock band Daughtry will deliver the final act of this year’s Decatur Celebration with an 8 p.m. performance Sunday on the Show Stage.

Sunday’s other headlining acts include the Jeremiah Johnson Band playing two sets of southern rock and blues on the Funfest Stage (6:15, 8:15), and Grammy-nominated singer/songwriter Crowder on the Christian Stage (6:45).

The earlier shows on the Funfest Stage feature Marquise Knox (2 p.m.) and William Marsala (4 p.m.), while Jeff Quick will take the Christian Stage for a pair of shows before Crowder (4, 5:45).

The Central Park Stage will feature Rock of Ages (1 p.m., 3 p.m.) and Dreaming in Colour (8:15), while the Imagine That Band will play the first of its three shows on the North Street stage at 4 o’clock. NCR will play three shows of modern country and classic rock on the Cabaret Stage (3, 5, 7), while the Prairie Street Stage features singer/songwriter Ashley Riley (noon, 2) and disco, funk, rock and pop from The Collective Band (4, 6, 8).