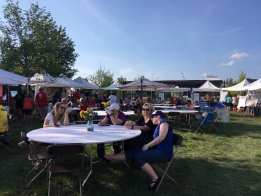 August 2, 2019 – Connoisseurs of specialty brews and wines from around Illinois attending the Decatur Celebration have plenty of options at their discretion in the Wine and Craft Beer Garden.

Now in its _____ year, the garden remains at it’s new home at northwest corner of William and Water near the Cabaret Stage.

Guests can buy 10 wine-tasting tickets for $10, otherwise all drinks are $5 per glass. Patrons may also buy wine by a bottle directly from the winery. The garden will be open until 10 p.m. Saturday, then from noon until 8 o’clock on Sunday.

Niemerg said his stand was offering sangria and as many as 12 varietals. Niemerg was one of seven wine booths in the garden, while the seven craft beer stands included Decatur’s own Door 4 Brewing and Decatur Brew Works.

“Today has been a really good day for us,” said Deion Corley of Door 4. “Yesterday was awesome, once we beat the heat. We were pouring beer like crazy.”

Corley said that while the beer industry can be competitive, there’s a camaraderie among craft brewers.

“It’s the industry, man; it’s awesome,” he said. “All the breweries here today are super-cool dudes and we’ve had a good time pouring beer with them.”