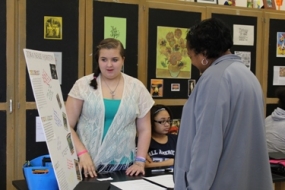 April 25 – Students in a Stephen Decatur Middle School art classroom had the opportunity to learn about the Harlem Renaissance through a special project.

Merry Lanker had students in her African American Art History class learn about this special time period by having them create different presentations. She said they did this project with the Harlem Renaissance because it was a more documented-era. “If you go back to our first unit, there is no information about the early art done at that time because we unfortunately had very poor records about what was going on during slavery since – at that time- slaves were not considered people.” She continued to say that even though it was a tough conversation, it was important for the students get a better understanding of how serious slavery was in American history.

Becca Evans and Keyshonta Barber are both in Lanker’s class. Evans created an informational board display on novelist Zora Neale Hurston. Evans said she spent a lot of time researching Hurston and learned an interesting fact about her. Hurston had put her education to the wayside after a falling out with her stepmother, but she later wanted to go back. “She wanted to go back to high school, but by the time that she decided she wanted to go back, she was too old. So she lied about her age and said she was 16 and stuck with that fake age her whole life.”

Barber also constructed an informational poster and focused on Augusta savage, an American sculptor. While learning about the various sculptures that Savage created, like Gamin, Barber found out that Savage had to overcome a lot of adversity from her father and the world around her. “Her father beat her and tried anything to stop her from creating art, but it was her dream so she kept going.” She continued to say Harlem Renaissance artists like Savage helped influence many other creators even after that era.

The students in Lanker’s class were able to create poster boards, blogs, and more for this project and present them to community members. “I see a lot of pride in what they have done and I don’t see that in a lot of their projects. So to have people come in from the community and see what they’ve done makes them see that there is more meaning behind the project than just a grade.”