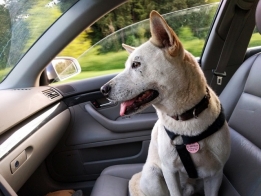 April 11 – A Good Samaritan who breaks open the window of a hot car to save a dog or cat could be arrested or sued for damages in Illinois, but state lawmakers want to change that.

A pending bill would shield a person from potential liability for breaking a window to rescue an animal from a hot car. Under existing law, the Samaritan would be open to criminal charges or a civil lawsuit for damaging the vehicle.

State Rep. David Olsen said his bill is a common-sense measure to protect someone trying to save a pet. An early version of the bill would have shielded the rescuer from criminal and civil liability so long as the person first made an effort to find another way to save the pet. The amended version protects rescuers from civil liability and establishes an affirmative defense for criminal prosecution for property damage and trespassing. “The individual could enter the vehicle and safely remove the dog or cat and then stay with it,” Olsen said.

Hundreds of pets die from heat exhaustion after being left in parked vehicles each year, according to the American Veterinary Medical Association. A San Francisco State University study found that the interior of a car on a 70-degree day can reach 100 degrees in less than 30 minutes. “You’ve got two choices: You can stay there and watch the dog die or you can become a criminal,” said Marc Ayers, Illinois state director of the Humane Society. “I don’t think that’s something that someone who’s acting in good faith should be facing.”

Prosecutor Jeff Brown of the Will County State’s Attorney’s Office, who had a hand in drafting the legislation, said society uses dogs for so much that they should at least be given this protection. “You can keep them alive,” he said. “You don’t have to stand there and watch them die.”

A number of organizations had concerns about the bill. Steve Hayden, with the Illinois Federation of Dog Clubs, said the bill’s language didn’t cover other hypothetical events. “Who is actually liable for the veterinary bills or the medical bills of the person who just got bit?” he asked. Olson promised to work with the opponents to address issues with the bill.

In the U.S., 26 states have hot car laws but, like Illinois, they only allow law enforcement or other specialists to break a window. Twelve states have a Good Samaritan law similar to Olsen’s. House Bill 4191 now awaits a floor vote but Olsen promised the committee that he would hold the bill until opponents can agree to language defining hypothetical liabilities.