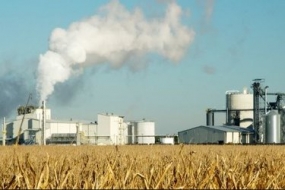 February 26 – Ethanol production in the United States is at record levels right now, with billions of gallons being produced annually, according to David Loos, Director of Research and Business Development for the Illinois Corn Growers Association.

However, despite gains in the industry, there’s still uncertainty in its future.

Ethanol exports are becoming increasingly important in the industry.

“What’s China going to do? What’s Mexico going to do with potential ethanol exports, and obviously with the new administration in D.C.? That’s presenting some opportunities and uncertainty,” Loos said.

President Donald Trump has spoken harsh words about both China and Mexico publicly in terms of trade, but Loos said many people in his industry remain optimistic about the administration.

“He said everything that we wanted him to say during the campaign when he was in Iowa, that he would support ethanol and the Renewable Fuels Standard and we feel there is a lot of opportunities with this new administration,” Loos said.

Loos said ethanol has a total economic impact of $5 billion a year in Illinois.