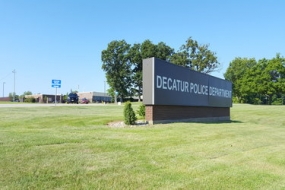 January 23 – The Decatur Police Department is hoping they might soon have a way to better communicate with other law enforcement agencies across the state.

DPD has been testing the COPsync Network for several months now. The COPsync Network is software that can be used for report writing, report approval and connects to the state’s Law Enforcement Agencies Database System (LEADS) and will allow DPD to share information with any other agencies using the software.

Sergeant Copeland with the Decatur Police Department says right now the software is geared towards patrol officers and their cars.

“It’s basically immediate information sharing and you can communicate with anyone on the network like an instant messaging type system,” says Copeland. “An officer in a squad car here can send a message to an officer in Texas. Right now there may not be much use for that but if more agencies were to start using it, and if we were to adopt it, then it could prove to be beneficial.”

Copeland says if more agencies adopt it DPD could communicate with officers in Bloomington, Champaign-Urbana and Springfield easier. DPD has done preliminary testing since October and is currently awaiting approval from the state for it to connect to the LEAD system.

Copeland says hopefully the LEADS approval will be in the next week or two.

If approved, the more in depth testing will begin. Copeland says the program is currently hobbled without the access they hope will be approved. Currently, the software isn’t costing DPD a dime but if they decide to pursue it in the future then it will be an annual subscription fee which Copeland says from what he’s seen will be significantly less than what they’re paying for their current solution.

Copeland says he could potentially see the software having major benefits down the road.

“It could really help as far as cost, ease of use, improving officer safety and improving communication among jurisdictions,” says Copeland. “The information and sharing amongst other agencies that are using the system is instantaneous.”