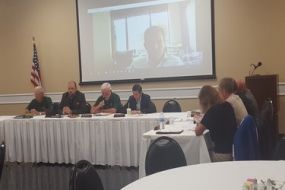 October 26 – Members of the community joined the Decatur Park District for another public discussion on what should be done about water and aquatic fun in Decatur.

The park board of commissioners was again joined by Aquatics specialty firm Counsilman-Hunsaker to field questions from the public. At the last special aquatics meeting the board gave possibilities of renovating the aging Fairview facility, replacing it or to build a new site.

Several attendees voiced their opinions with some echoing that the park board should take it’s time in a decision and think bigger on their options.

Vice President of the board Chris Harrison says the discussion surrounding aquatics in Decatur is the most response he’s seen from the public on a park district issue in the three years he has served on the board.

“To be honest the input has been very helpful because this is not a decision we just make quickly,” says Harrison. “This has taken a lot of thought and sleepless nights worrying and wondering about what we are going to do. The public has reached out in a number of ways and has given me input, questions and support, and questions I think we have good answers for.”

Executive Director of the Decatur Park District Bill Clevenger says it was good to see the community out to voice their opinions.

“They want us to keep looking to the future and do things in a method that will be long term instead of short term,” says Clevenger. “I think the take away is that people want to see change in aquatics, to see aquatics get better, to become a destination point instead of people leaving town.”

Doing a completely new site at Nelson Park would cost around $9.2 million.  The new facility would feature a leisure pool with zero depth entry and a play structure, toddler splash features, two waterslides, and a crossing activity.  A lap pool would have six lanes, diving boards, and a zip line.  A plunge pool would also be added that caters to teenagers and young adults.  It would be a deep pool to allow a bowl slide, climbing wall, rope swing, and drop slide.

Clevenger talks about what the board will now do moving forward.

“I think the next park board meeting [Nov. 2nd] the conversation will continue and maybe an action taken with the support we’ve experienced so far,” says Clevenger. “One thing to keep in mind is the timetable for design is four or five months coupled with construction season. Timing is critical in this moving forward we have to make decisions in a timely manner so we can engage those processes it takes to get to the final product.” 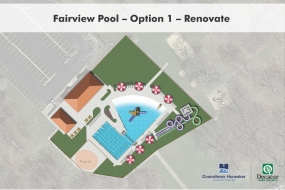 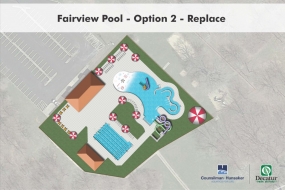 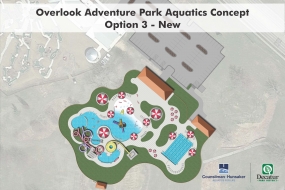