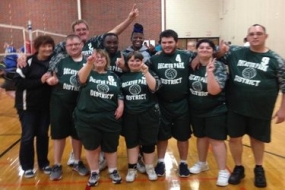 October 25 – The Decatur Tigers Special Olympics volleyball team is back home with some golden hardware following a successful weekend.

The Tigers competed in a Special Olympics state volleyball tournament this past weekend in Rockford, IL.  There was some tough competition, but the team came home with a gold medal.  Special Recreation Supervisor Dana Floyd says the team played really well in the tournament.

“They were so pumped and excited,” Floyd says.  “They played their first match Saturday against tough competition and then Sunday was really tough competition.  But we came home with gold.”

There are eight athletes on the team.  The Tigers won a regional competition in Effingham in September to move on to the state competition.  The team plays in the modified division, which uses a bigger volleyball and a smaller court.

The volleyball season has ended for the Tigers.  Basketball season is next and will start up very soon.