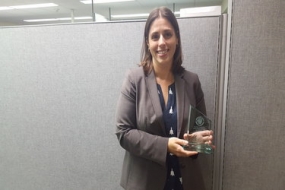 October 14 – The Macon County Board honored the hard work and dedication of one employee at last night’s monthly meeting.

She says to hear the kind words from Scott were very encouraging and that she is very thankful to have been recognized.

“I’m honored that I was given this award and I really appreciate that by boss [Scott] nominated me for it,” says Kurtz. “He’s a great boss and very supportive. It was really nice to hear all the positive things said about me, he’s definitely been the best boss I’ve worked for.”

Scott says Kurtz is always positive and a hard worker that puts in many extra hours.

“The sex crimes cases are so much work and she always wants to do the right thing so she puts the extra effort into it,” says Scott. “She’s a great person and prosecutor and to win all the trials she’s had I feel very blessed having her and I think it’s a great recognition for her to get this.”

Scott says that everyone in Macon County should feel lucky to have someone like her.

In other business…The plan to provide additional funds to perform environmental design work for a project that would replace the current two-lane bridge with a four-lane structure was unanimously approved.

The extra funds are $65,031, and will be covered by Macon County, with full reimbursement coming later from the state.

The urgency for construction is apparent after an inspection revealed structural issues with the bridge.