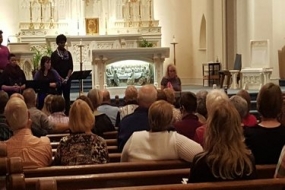 “We are mourning those who suffered and died from domestic violence and celebrating those who have survived,” Ducy says.  “Our laws are so much better now so more people come forward now.”

Domestic violence affects everyone: female, male, young and old.  The candlelight ceremony at St. James Catholic Church involved songs from New Vision Praise and Worship Team and guest speakers.  Susie Wayne is a domestic violence survivor.  Her boyfriend was abusive for years and she had a hard time getting away from him.  Now, she’s happily married and lends her time to help others who have gone through similar things.

“I was pushed, choked, hit, you name it,” Wayne said, speaking to the crowd.  “Never let someone have that much control over you where you choose them over your kids.  Never.”

It’s hard to track if the domestic violence rate has gone down, Ducy says, because so much of it goes unreported.  However, she believes stricter laws and awareness has helped.

“Our laws are so much better so more people do come forward now,” Ducy explains.  “We are very fortunate to have law enforcement here that make arrests.  When the mandatory arrest policy came into effect, that helped, because they don’t look at the victim and ask for an arrest.”

Ducy says the more awareness there is, the more likely people will come forward and stand up against their abuser.

Dove offers many services to domestic violence victims.  Their services go beyond just offering shelter.  For more information about Dove’s services, you can click here.