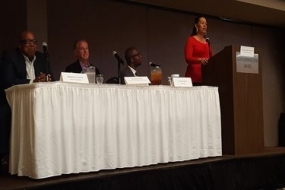 On August 25, Lisa Creason watched excitedly as Governor Bruce Rauner signed Senate Bill 42 into law to give her and many other ex-offenders a career opportunity in health care. The Rauner administration is currently trying to reduce the state’s recidivism of ex-offenders to prison. Rauner’s goal is to reduce recidivism in Illinois by 25% in the next ten years.

Retired Chairman and CEO of Bachrach Clothing Ed Bachrach had high praise for ex-offenders he’s worked with in the past.

“We had two convicted murderers that worked for us that were some of the best employees I ever ran across,” says Bachrach. “I would only encourage employers to keep an open mind when people are coming in looking for a job. There’s no reason why an ex-offender couldn’t do a superior job in an organization.”

State President for the Black Chamber of Commerce of Illinois Anthony Walker attended the discussion and is himself an ex-offender. He says he believes the person closest to the problem is always closest to the situation. Walker started an ex-offender re-entry program, Mission X-Cell, in Decatur that runs every Monday evening.

“We really believe that if you get an ex-offender employed that will take a lot of weighted stress of the shoulders and will get them to focus more on society,” says Walker.

Walker gave this bit of advice to local ex-offenders looking to turn their lives around.

“Don’t give up,” says Walker. “Sixty percent of ex-offenders I come in contact with gave up. They felt they were dealt a bad hand and didn’t know how to reshuffle the deck get back up and keep going. It wasn’t easy for me returning to society in ’94 from prison, never been back to prison, but I had to pull myself up by the bootstraps and work hard and believe in myself.”