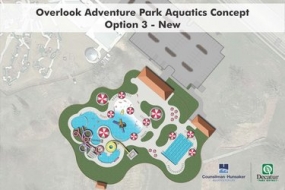 October 12 – With the life of Fairview Aquatic Center running out, the Decatur Park District is weighing their options on how to offer water fun in Decatur.

Aquatics specialty firm Counsilman-Hunsaker presented feasibility options for Fairview Aquatic Center to the Park District at a community meeting Tuesday evening.  They say the life of water park facilities is usually 30 to 50 years and since the Fairview Pool is over 25 years old and the bath house was built in the late 60s, the Park District is collecting options.

“As with all facilities, there is a life-cycle to them, so now we are taking a look at the future,” Park District Executive Director Bill Clevenger says.  “We are looking at the next 30-40 years of aquatics in Decatur and we are hoping to make a long-term investment into the future of our community.”

The firm discussed three options for aquatics in Decatur: renovate the Fairview facility, replace the Fairview facility, or build a new site.  The new site is proposed to be at Nelson Park near Overlook Adventure to the east of mini golf.  The firm’s representative says they identified Overlook because of space available, and recent development with more coming (ropes course and climbing wall).  The representative said their new site plans for Nelson Park would work in other areas where land was available and would be similar in cost.

Renovating the Fairview facility would cost about $5.3 million.  It would involve keeping the zero depth entry, adding a new crossing amenity over the pool, adding a children’s play structure in the shallow end, and adding a new water slide.  Replacing the pool would cost an estimated $7.5 million.  It would involve splitting the pool into a lap pool and leisure pool.  The lap pool would be a standard 25 yard pool with six lanes, which is what most schools would need for swim meets.  The leisure pool would have a vortex, play piece for children, a lazy river, and water slides.

Doing a completely new site at Nelson Park would cost around $9.2 million.  The new facility would feature a leisure pool with zero depth entry and a play structure, toddler splash features, two waterslides, and a crossing activity.  A lap pool would have six lanes, diving boards, and a zip line.  A plunge pool would also be added that caters to teenagers and young adults.  It would be a deep pool to allow a bowl slide, climbing wall, rope swing, and drop slide.

The Fairview site has footprint restrictions and limited parking expansion.  The new site at Nelson Park would be the most expensive, but it also has plenty of room.  The firm rep said about 60 percent of aquatic facilities operate at a loss while 38 percent break even.  The rep said the Nelson site would offer the most opportunity for revenue and would meet the needs of the largest audience, but it’s the most expensive.

There are a lot of factors to look into.  Park Board President Bob Brilley II says they are simply reviewing their options at this point.

“There is no timeline on when this could be completed,” Brilley says.  “This all could change to something different.  We are just looking at feasibility options.”

The firm, nor the Park Board discussed revenue options.  Clevenger indicated they would issue some bonds to help pay for the project.

The Park District is looking for your input on aquatics in Decatur.  You can contact them at 422-5911. 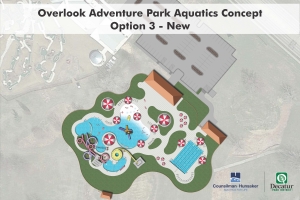 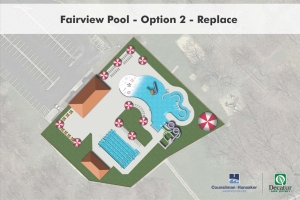 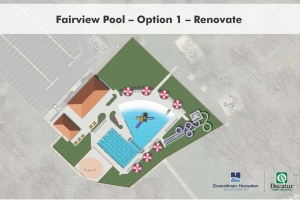