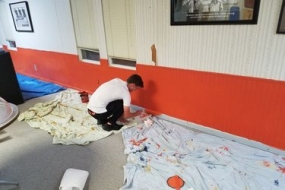 October 11 – Your votes could help a Mt. Zion teacher get funding for a class project that will also serve as an exhibit at the African-American Cultural & Genealogical Museum in Decatur.

Each year, Rich Hansen’s African-American Experience class does a community service learning project that involves constructing an exhibit that will be displayed at the African-American Museum in Decatur.  The museum is a not-for-profit and relies on charitable donations to stay open.  In the past, Hansen’s class was able to secure funding through the Mt. Zion Education Foundation, but this year there wasn’t funding available.

“A local Farmers Insurance agent contacted me and told me about this grant opportunity,” Hansen says.  “Each year, the exhibit that we build cost about $2-3,000 and this particular grant is for $2,500.  It’s simply awarded on who gets the most votes.”

“We are going to focus on primarily World War II and the immediate aftermath of the emergency integration that took place during the Second World War, Supreme Court cases like Brown v. Board [of Education] that started to chip away at segregation, and highlight sport figures like Jesse Owens and Jackie Robinson,” Hansen explains.  “So we’ll be highlighting some of the people and events that took place in the early Civil Rights Movement.”

About 50 to 60 students will be working on the project, which would be completed May 8, 2017.  Students have begun painting walls at the museum for their next exhibit.

Farmers Insurance awards 60 teachers nationwide with $2,500 to help offset expenses of class projects.  Hansen is in the running and your vote could help his class out.  You can vote once per day through October 31.  You can vote multiple times if you use more than one email address.  If Hansen is one of the top 60 “vote-getters,” he will be awarded $2,500 for the project.

To vote for Hansen and his class project, you can click here.

Pictured below are past projects provided by Hansen.