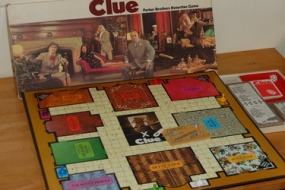 September 16 – They may be biased, but the Board Knight staff says they think Clue should be inducted into the Toy Hall of Fame.

Alex Fandel works at Board Knight on Main Street in Decatur.  They sell mostly card games and board games along with some action figures and other games.

After a short pause, Fandel quickly answered that Clue should definitely be inducted.

“Clue is popular enough for a movie adaptation and spin offs,” he says.  “If it’s still popular 30 plus years later, it probably belongs in the Hall of Fame.”

Strong says they will induct two or three this November.  Fandel also felt strongly about the Coloring Book, Uno and Dungeons & Dragons.

“Bubble wrap seems like a silly finalist to me,” he laughed.  “I’m not sure how that is considered a toy.”

Fandel wasn’t so sure about the swing, either, saying he doesn’t think anything you sit on can necessarily be a toy.  The staff says they were pretty surprised a number of finalists aren’t already in the Hall of Fame.

So far, 59 toys have been inducted into the National Toy Hall of Fame.  More information can be found here.