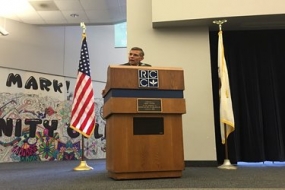 September 15 – As part of Constitution Day students at Richland Community College received a history lesson on the 4th Amendment.

Illinois 4th District Appellate Court Judge Tom Harris Jr. was asked by Professor Larry Klugman at RCC to talk to the students about Constitution Day, which celebrates the signing of the Constitution in 1787.

Harris says because it is such a broad document he decided to talk to the students about the 4th Amendment and the protections that amendment provides against unreasonable searches and seizures.

“I think it’s critical for the public to understand that the 4th Amendment was an attempt by the primers of the Constitution to find the middle ground between the interests in keeping us secure from criminal activity or acts of terrorism and privacy interests,” says Harris.

He says there has been a history dating back to the 1760’s with the use of what were called general warrants or writs of assistance that were very broad and allowed the government to conduct broad and far ranging searches that wouldn’t be allowed today.

Harris says it was based on those general warrants that the 4th Amendment protections were put in place.

“We as citizens of this country should always be on the alert and safeguard our 4th Amendment protections,” says Harris. “We have to recognize that there are competing interests, this tension between our right to be secure and thus our interest in having the police be able to investigate criminal activity but the competing interest, our right to privacy, is also very important.”

There was a question and answer session with the students after the presentation. Harris says it was heartening conversation because it indicated the interest in the 4th Amendment.

“I told the students that in Illinois alone if you do a search of Illinois cases there are over 5,000 appellate court decisions that deal with the application of the 4th Amendment,” says Harris. “It’s a difficult subject for courts and it’s dealt with on a case by case basis.

He says the students seem to have a good understanding that typically a search warrant is necessary for police officers to conduct a search but there are occasions where the police are justified in not obtaining a search warrant in their conducting of a search.