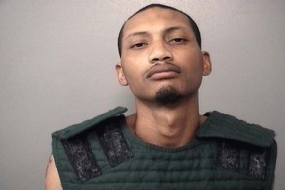 September 9 – A man who beat his 4-year-old daughter to death will face 20 years to life in prison.

29-year-old Darrell A. Reynolds was arraigned Thursday in Macon County Circuit Court.   He will be due back in court September 28 for his preliminary hearing.  Reynolds has been held in jail on a $2 million bond.

Reynolds was charged with murder after his 4-year-old daughter, Ammarah Reynolds, arrived at a local hospital unresponsive and severely beaten.  During police interviews, Reynolds confessed that “I just killed my daughter,” according to a police affidavit.

Ammarah’s mother, Dal’von Taylor-Reynolds is facing charges of felony endangering the life or health of a child. She will be arraigned in court Friday morning.  Taylor-Reynolds told police Darrell had been repeatedly abusive to Ammarah and herself.

Police found Ammarah’s body was covered in bruises.  Reynolds confessed to detectives he struck Ammarah multiple times with a belt.