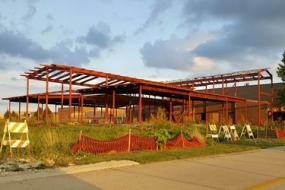 September 8 – The Capital Development Board for the new Student Success Center at Richland College reconvened for the first time in some time.

The board last met in August of 2015 where they were given bad news as the project was placed on hold because of the ongoing budget impasse.

After the passing of this summer’s stop-gap budget good news came their way as the board was told they would receive $4.2 million in re-appropriated money for the project with the efforts lead by State Senator Chapin Rose.

Vice President for Finance Administration at Richland Community College Greg Florian talks about what the next steps are in the process.

“Now contractors are restarting their project, re-looking at their bids and checking to see if costs have escalated since the project was bid originally,” says Florian. “That will be collected and a new cost for the project will be determined and from that we’ll get a notice to proceed from that point.”

The project has a general prime contractor with five prime-subcontractors on the project. Florian says to restart a project is never easy.

“We were about 40% done with the project, so part of the project was in existing space which has already been gutted and left vacant, a new concrete slab was poured, steel was put up and then everything was stopped,” says Florian. “Now you have to go back and remediate a few things such as rust on the steel, make sure piping didn’t have water in it that sat and that nothing happened while it wasn’t functionally in use.”

Florian says he estimates that construction will resume around early November of this year.