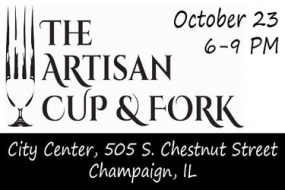 The Artisan Cup & Fork is a new food competition that serves as a fundraiser for the not-for-profit The Land Connection.  The cooking competition will combine farm to table chefs with family-owned farms to produce a signature dish.

Richland’s Culinary Arts Instructor Chef Ryan Rogiers and TapRoot chef John Redden will be participating.  The two were chosen based on their farm-to-table skills.

“I think it’s great for Central Illinois as a whole and being able to have Decatur mentioned in that competition,” Rogiers says.  “It gets us on the map and also sheds light on our culinary program at Richland Community College.  We are the only Culinary Arts program in the area.”

Additional participants include August Creek Farm and Cypress Grove Farm, both from Assumption.  Sloan Implement is a sponsor of the fundraiser as well.