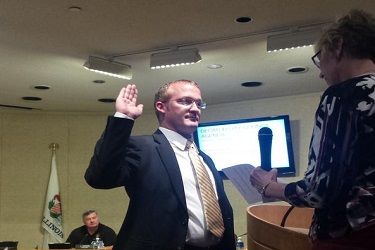 DECATUR–  The Decatur City Council is full for the first time since mid-August.

On Monday night the City Council voted 4 to 2 to appoint Chris Funk as its newest member.

The 35 year old is the Senior Vice President/Chief Credit Officer for Hickory Point Bank and being on the City Council marks his first time serving in public office.

Applauded by fellow council members for his expertise in finances, Funk says he is ready to get to work, “In my day job I work with finances, I know finances are very important to the viability of a business or a community and I think I can lend my knowledge to the City Council.”

Mayor Julie Moore-Wolfe said Funk’s financial background will aid the city council, especially with their budget preparations around the corner, “I don’t know Chris real well yet but everyone I talk to say he has one of the brightest financial minds in the community and without a real master of finances on the council now, there is no doubt in my mind that he will serve us well.”

The two ‘no’ votes came from Councilwoman Dr. Dana Ray and Councilman Bill Faber. Dr. Ray said she felt that another applicant was more qualified for the position and Councilman Faber said he didn’t agree with the way the interview process was conducted to choose Mr. Funk.

Funk’s term will be a 2 year term; he is filling the vacancy left by current Mayor Julie Moore-Wolfe when she was appointed Mayor on August 17th following the death of Mike McElroy a month prior.

In other business… The City Council agreed to a contract with AECOM to enter into a study of the city’s sanitary sewer system. The study is a precursor to an agreement with the USEPA to upgrade and or replace sections of the sewer system that get backed up during times of heavy rain. City Manager Tim Gleason says the sewer study could take several months and the replacement/renovation process for the sewers could take several years. Gleason says the study will begin immediately. The Council also set the date for their vote of the proposed Aldi relocation to the corner of US Rt. 51 and Ash Avenue. Mayor Moore-Wolfe says the council will discuss, and possibly vote, on the issue during their October 19th meeting.