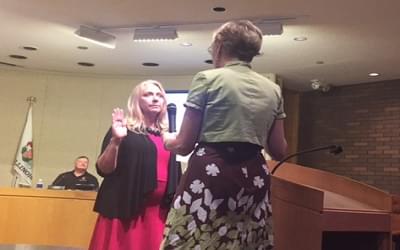 DECATUR–  A city founded in 1829, not many ‘firsts’ happen in Decatur anymore, but Monday night was one of those rare occasions as Julie Moore-Wolfe was appointed to the position of Mayor, the first woman to claim that title in Decatur’s history.

Moore-Wolfe, a 6 year City Council veteran has served in the interim position since the sudden passing of late Mayor Mike McElroy a month ago.

Moore-Wolfe said Monday night that it was important for the council to appoint someone who had a similar vision of the community to McElroy’s, and she intends to follow through with that, “It’s an honor to get this opportunity, I have great respect for what Mayor McElroy did in this seat and I fully expect to continue his vision. We had similar ideas as to what we wanted to do as far as bringing jobs here, improving the neighborhoods, and doing what we thought was best for the citizens of Decatur and I think we can continue that.”

Moore-Wolfe said the last month has been a whirlwind, but having the opportunity to serve as Decatur’s first female Mayor never strayed from her mind, “The feedback I have gotten from the community, especially the women in this community has been refreshing and it’s something that I take pride in.”

“Women, especially around my age remember when Decatur elected its first City Councilwoman, Carol Brandt, in the 1970s, and their support through this has been huge,” Moore-Wolfe added.

Following the adjournment of Monday’s meeting, the Council met in closed session to discuss the future of the seat that is now left open following the appointment of Moore-Wolfe. City Manager Tim Gleason said the Council will have 60 days from Monday night to appoint a new council person. He said anybody from the community that meets the state issued criteria, and fills out an application, will be considered. No timeline was set for when they may make their decision.