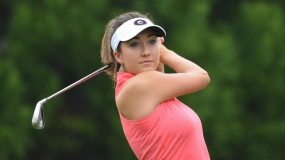 June 17, 2019 –  Last year, Jillian Hollis made her Symetra Tour debut as a professional at the Forsyth Classic. She forced a four-hole playoff with the eventual winner Isi Gabsa but missed out on her first title. This year, Hollis put those demons to rest as she conquered Hickory Point Golf Club and won by two strokes at -13. The win is her second of 2019 and slides her into the No. 1 spot on the Volvik Race for the Card standings.

Hollis played in the final pairing with Cydney Clanton, who forced her way into contention with a second-round 64 to enter the third round tied with Hollis at -11. “We were back and forth for a little bit, and I made some birdies earlier on. She had a birdie, but the pins were in really hard locations,” said Hollis. “It was great having her in the group…we had a fun time.”

The 22-year-old Hollis returned a 2-under 70 in the final round and was almost perfect off the tee, hitting 13 of 14 fairways. This was the last playing of the Forsyth Classic and while Hollis is sad to see the tournament leave the schedule, she was thrilled to win on a course that felt so comfortable.

“I was so excited to play this year because you go and play a golf course that you play really well at and you love, and I loved this golf course,” said Hollis. “It’s very similar to my golf course at home and the courses I play at home, so to get to play here and finally win after four playoff holes last year…that’s just experience. Just having that and believing in myself and knowing that I could do it. 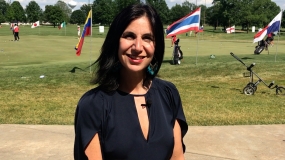 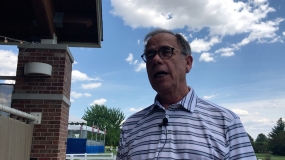 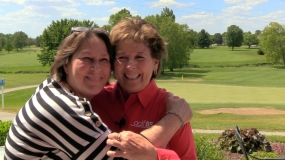 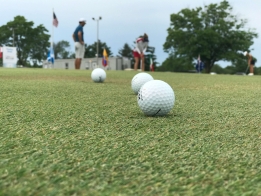 DECATUR, Ill.— A total of 144 players will take on the challenge that Hickory Point Golf Club presents starting Friday with the first round of the 35th annual Forsyth Classic presented by Decatur Park District.

Three featured groups highlight the competition for the 11th event of the 2019 Symetra Tour season.

The current No. 1 in the Volvik Race for the Card is Leona Maguire (County Cavan, Ireland) and she also leads this pack, making her first Symetra Tour start since the Zimmer Biomet Championship hosted by Nancy Lopez. Over the last two weeks, Maguire competed in the U.S. Women’s Open going 75-76 and spent time in her native country. She comes to Macon County in search of a third win on the season.

Coming off her first victory as a pro at the Four Winds Invitational, Perrine Delacour (Paris, France) adds to the firepower in the group. She has four straight top-five finishes and hopes to keep the streak alive in Central Illinois. The incredible run has launched her 27 spots in the Volvik Race for the Card all the way to No. 2. A past Symetra Tour graduate in 2013, Delacour has 68 career starts on the LPGA Tour.

Jillian Hollis (Rocky River, Ohio) returns to the site where she made her professional Symetra Tour debut and forced a sudden-death playoff one year ago. The three-time All-American for the University of Georgia and first-time Symetra Tour champion earlier this season at the IOA Championship presented by Morongo Casino Resort & Spa is No. 5 in the Volvik Race for the Card with four top-10s in eight starts.

A past champion of the Forsyth Classic in 2014, Madison Pressel (Boca Raton, Florida) looks to become the second two-time winner in tournament history joining Nicole Jeray (1998, 2000). Through 10 starts this year, the University of Texas alumna has not missed a cut including five top-25 results and a season-best tied for second at the IOA Invitational. In total, Pressel has nine top-10s in her Symetra Tour career.

Meanwhile, Jenny Coleman (Rolling Hills Estates, California) is on a solid run as of late with back-to-back tied for third finishes at the Valley Forge Invitational and Four Winds Invitational, as well as five straight cuts made. Her best result in the Forsyth Classic of tied for 11th came in 2016. In addition, the University of Colorado graduate owns 10 career top-10s and finished 24 tournaments with a score under par.

Maddie Szeryk (London, Ontario, Canada) arrives in Decatur fresh off ending tied for fifth in northern Indiana, her second consecutive top-five. After missing the cut in four of her first seven starts this year, the Texas A&M University alumna has found a groove and climbed to No. 6 in the Volvik Race for the Card. The four-time All-SEC First Team performer was also a four-time collegiate winner for the Aggies.

Ten days ago, Min Lee (Taoyuan City, Chinese Taipei) stepped into the winner’s circle at the Valley Forge Invitational for her second career Symetra Tour win. She is now preparing for her second start in The Forsyth Classic presented by Decatur Park District following a tied for 71st finish at the Shoprite LPGA Classic presented by Acer. The last time she competed in Decatur was 2014 with a tied for 21st result.

Back in 2008, Vicky Hurst (Melbourne, Florida) captured The Forsyth Classic title. It is one of eight total victories for her Symetra Tour career and part of 17 top-10 finishes on the “Road to the LPGA.” So far in 2019, Hurst has played the weekend eight times across nine starts with a top showing of tied for sixth at the Symetra Classic. This week marks her first time back in Decatur, Ill. since the win 11 years ago.

Rounding out the final featured group is Chorphaka Jaengkit (Bangkok, Thailand), a past champion of this event in 2017. She defended her crown with a tied for 36th result last year. A 2017 rookie on the Symetra Tour, she has one additional top-10 finish in her career coming at the Valley Forge Invitational earlier this month. That performance is also part of three straight cuts made in her third season on Tour. 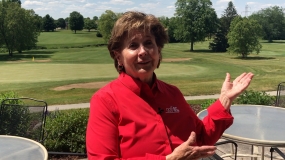 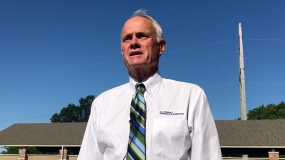 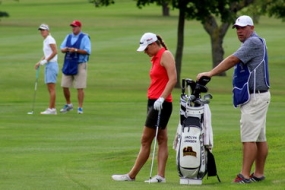 June 12, 2019 –  The 11th stop on the 2019 “Road to the LPGA” takes the Symetra Tour to Hickory Point Golf Club in the Land of Lincoln for the 35th annual Forsyth Classic presented by Decatur Park District from June 14-16, also the final installment of the tournament.

Defending champion Isi Gabsa (Munich, Germany) is not among the competitors, as she was a 2018 Symetra Tour graduate. One of seven top-15 performances for Gabsa on the season, the win helped land her at No. 9 in the Volvik Race for the Card.

Action gets underway at 7:30 a.m. CT all three days with play starting off No. 1 and No. 10 tees in the first and second round. Meanwhile, all groups will head off No. 1 tee in twosomes for the final round with a trophy presentation to follow on No. 18 green.

COUPLE COLLEGIATE TIES AT 11TH STOP
Two individuals with ties to Illinois institutions for higher education are featured among the competition teeing it up in the Prairie State and are names to keep an eye on once the event starts on Friday.

Bradley University and Northwestern University each have one lone representative in Danielle Lemek (Doniphan, Nebraska) and Hannah Kim (Chula Vista, California), respectively. For the former Braves standout, the tournament host site is only about 80 miles from campus.

“I am ecstatic to be competing for the first time in The Forsyth Classic and it is nice to be in a familiar area again,” said Lemek, a three-time Missouri Valley Conference Golfer of the Year during her time in Peoria. “To top it off, I am staying with a family that has ties to Bradley, as they are the parents of the softball coach. Bradley University was not only my second home, but prepared me for this journey of chasing a career in professional golf. I could not be more excited to get this week started in Illinois.”

COUNTRIES (AND STATES) OF THE FORSYTH CLASSIC

A total of 35 countries are represented this week at The Forsyth Classic presented by Decatur Park District, led by the United States with 74 players then followed by the Republic of Korea having the next highest of seven competitors.

“Representing my country is a great honor,” said Emily Penttilä (Helsinki, Finland), who owns a season-best finish of tied for 25th at the IOA Championship presented by Morongo Casino Resort & Spa. “My rookie year of 2017, I was the only Finn playing in the United States as a professional. Seeing the flag around the Symetra Tour every week is important and hope to have it flying soon on the LPGA Tour.”

Individuals from 25 different states are also set to tee it up at Hickory Point Golf Club. No players hail from the host state, while California boasts the most with 14.

“I love playing in the Midwest and can tell I’m close to home, which brings me some comfort,” said Allyssa Ferrell (Edgerton, Wisconsin), the player that is closest in proximity to her hometown. “If there is anything that suits my game when playing tournaments in this region, it would be knowledge of the grass. I take a lot of pride being from the Midwest because it’s the best part of the country, especially this time of the year.”
ROOKIES APLENTY IN THE PRAIRIE STATE

Among them is Alexandra Kaui (Kapolei, Hawaii), who has played the weekend three times in the first five starts of her Symetra Tour career. The University of Nevada Las Vegas alumna is fresh off a season-best tied for 16th performance at the Four Winds Invitational, one of two top-20 finishes this year.

“My rookie season has required me to learn a lot about myself and the strategy that works best with my game,” said Kaui, the 2016 Mountain West Conference Championship individual title winner. “I’ve had to adjust to all the prep days we get for tournaments and how to properly utilize them. My goals are to improve as a player and person, then hopefully get my LPGA Tour card or at least exempt into Q-Series.”

VOLVIK RACE FOR THE CARD UPDATE

The Symetra Tour annually awards LPGA Tour membership to the top players on the Volvik Race for the Card money list at the end of the season and will usher in the next graduating class after 24 events on the 2019 calendar.

With 10 tournaments in the books, the top-10 underwent some shifting following the Four Winds Invitational. All 10 members from the group are in Decatur including current No. 1 Leona Maguire (County Cavan, Ireland), set to make her first start since the Zimmer Biomet Championship hosted by Nancy Lopez.

“It was great to spend a week at home in Ireland after six weeks on the road,” said Maguire, a two-time Symetra Tour champion this season at the Windsor Golf Classic and Symetra Classic. “I got to check-in with my coach, spend time with family and friends, and feel refreshed and ready to play this week. I’m looking forward to returning where I started my Symetra Tour career last year, lots of good memories with a top-five finish and hole-in-one.”

From 1999-2002, the official qualifying tour of the LPGA handed out three cards. Then from 2003-2007, that number increased to five before 10 were distributed starting in 2008. Since the inaugural year, a total of 147 players have graduated to the big stage. 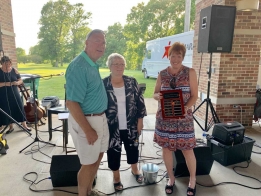 June 12, 2019 – The Forsyth Classic kicked off last night with the Par-Tee under the Pavilion at the Hickory Point Golf Club. During the event, Organizer Cindy Deadrick Wolfer was proud to award the Denene Wilmeth Volunteer Award to long time volunteers, Pat and Cindy Laegeler. A Pro-Am is scheduled for today and Thursday with tournament play beginning on Friday at the Hickory Point Golf Club in Forsyth. 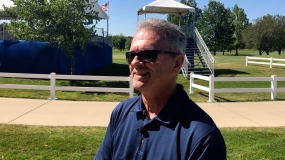