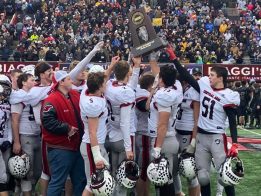 DECEMBER 2  –  It was a tough Saturday for Central A&M Football (13-1), as Lena-Winslow ended the undefeated state championship dream with a 58-20 season finale in the IHSA Class 1A State Championship Game.

But for players like Connor Heaton, Jacob Paradee, Connor Hutchins, Brycen Burgener, James Paradee, and Keegan Waterman, it was actually their second varsity loss of the calendar year, for the sports currently in-season.

High School Basketball has officially tipped, but for the Raiders football players prepping to hit the hardwood, it actually won’t begin until Tuesday. And the state title football loss is the first varsity football or basketball loss of 2019, since the Class 1A State Basketball Semifinal loss to Cissna Park … and those are the only two losses of 2019.

It’ll be a short turnaround for the coverage area’s top squad of returners, which also returns Griffin Andricks and Ross Sloan into the mix. Practice begins on Tuesday, and that season opener arrives quickly, with a road game at Decatur LSA on Friday, and a home game against Argenta-Oreana on Saturday. A likely number-one seed should follow next week in the Macon County Tournament, hosted by Meridian High School, which comes with an opening round contest on Monday evening.

The season of the highest possible expectations for Raiders hoops is well deserved, after a 33-4 season in 2018-2019, which only witnessed a trio of pre-New Year’s losses … to Williamsville (the 2019 Class 3A Football Champion with an enrollment of 467), Lincoln-Way East (the Class 8A Football Champion with a private school enrollment of 2,902), and Chicago Corliss, who advanced to Class 2A State Basketball Tournament in March, finishing in fourth place.

The football season will have some final pieces over the coming months, as honors and accolades will continue to roll in, including the ESPNDecatur Real Men Wear Pink Football Awards on Sunday, January 26th at LSA High School. The awards are part of the Real Men Wear Pink celebration banquet, delivered by HSHS St. Mary’s Hospital. The top players at each position will be honored as finalists, with winners presented a trophy, courtesy of Maverik Marketing.

As for the basketball season, it’s already fully underway for many of the NowDecatur teams, which included Thanksgiving Week Tournament finishes of second place (Warrensburg-Latham), third place (MacArthur), fourth place (Cerro Gordo-Bement), and fifth place (Eisenhower), among others.

The Earthmover Credit Union Game of the Week schedule will begin next week with the semfinals and championship of the county tournament, then return in January with a game or two each week, on ESPNDecatur 1050 AM. Lee will be joined by Arius Young and Jeremy Moore for those broadcasts in 2020.

WSOY, ESPNDecatur and NowDecatur have already featured a number of University of Illinois, and Millikin University Basketball games to start the year, but this week is a full, cannonball-dive into the winter campaign.

Monday Night features the Fighting Illini (6-1) hosting the Miami Hurricanes (4-3), as part of the Big Ten/ACC Challenge. Tipoff at 6 p.m., after Soy City Buzz on First Mid Mondays. Coach Brad Underwood’s club begins Big Ten play on Saturday afternoon, with a road trip to College Park, Maryland, where the Illini battle the fifth-ranked Terrapins. Pregame will begin at 3 p.m., with tip at

The NowDecatur family will feature over 20 St. Teresa Bulldogs games in 2019-2020, including Monday’s Night’s season opener at The High School of St. Thomas More in Champaign. The game can be heard on ESPNDecatur 1050 AM and NowDecatur.com, beginning at the conclusion of the junior varsity game around 7:15 p.m. Aric Lee and Blake Allison will have the call. The Bulldogs return to WSOY 1340 AM/103.3 FM on Friday night with a road trip to Auburn, with the same broadcast time, and team, shifting to WSOY.

The Millikin Big Blue Men’s Basketball team (1-6) welcome a pair of conference-opening foes to the Griswold Center this week, as the Elmhurst Bluejays (5-0) come to town on Wednesday night for the 7 p.m. tip, and the Wheaton Thunder (4-2) roll-in Saturday at 4. Second-year head coach Olivia Lett’s Big Blue women’s team (6-1) also host the Thunder (6-2) on Saturday, with a 2 p.m. tip. All three games can be heard on ESPNDecatur 1050 AM and NowDecatur. Lee and Lett will broadcast the men on Wednesday, with Lee and Scott Chapman splitting Saturday’s games, each alongside Jeremy Moore.