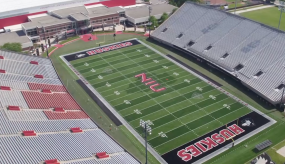 NOVEMBER 25  –  For the sixth time in program history, the Central A&M Football Team will play for a state championship.

The Raiders (12-0) used a late interception by Jacob Paradee, to hold off a charge by Athens, and tacked on a few fourth quarter scores, to defeat the Warriors, 35-21. Paradee would complete a monumental performance with a postgame flip, which included tossing a touchdown, running a touchdown, and flying-around the gridiron to gobble-up 24 tackles.

Lena-Winslow (12-0), the top-ranked team in the state, awaits Central A&M on Friday morning, when the Raiders kickoff at 10 a.m. from Northern Illinois University’s Huskie Stadium in DeKalb. The Raiders return to the championship game for the first time since 2001, and will aim to win their first 14th game since 1997. The 2001 roster included current head coach Brent Weakly, who was playing for 30-year Raiders coach, Mark Ramsey.

Ramsey is now the head coach of the St. Teresa Bulldogs, and it wasn’t quite as good of a Saturday for the Raiders Central Illinois Conference foe. The Bulldogs held a 14-7 lead after the opening quarter of their Class 2A Semifinals battle with Nashville, but the Hornets scored the game’s next four touchdowns and went on to also win, 35-21.

St. Teresa finished the season with an 11-2 record.

(1) The Central A&M Raiders vs. (2) The Lena-Winslow Panthers