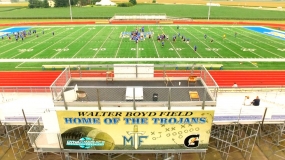 OCTOBER 11  –  Another weekend of football, and baseball, hits the NowDecatur stations this weekend.

The Earthmover Credit Union Game of the Week features a pair of 5-1 Sangamo Conference teams, as the Athens Warriors travel to Maroa to battle coach Josh Jostes’ Trojans. Each team has fallen to Williamsville this season, but a one-loss season, and conference runner-up finish, stays alive for the winner. Aric Lee and ‘T-Mac’ Tony McClain have the call, with the Dale’s Southlake Pharmacy Pregame Show at 6:45 p.m., and kickoff at 7.

With the St. Louis Cardinals hosting the Washington Nationals in Game One of the National League Championship Series on WSOY 1340 AM and 103.3 FM, the St. Teresa broadcast has been shifted for Friday night.

The University of Illinois football team is back in action on Saturday morning, when the Michigan Wolverines (4-1) come to Champaign. Kickoff is set for 11 a.m. as the Fighting Illini (2-3) try to get back to .500. Pregame begins on WSOY at 10 a.m., and depending on how close the game plays out, Game Two of the NLCS, could take over on the station around 3.

The Millikin Big Blue (2-2) aim to stop a two-game losing streak on Saturday afternoon, as they travel to Waukesha, Wisconsin, to play the Carroll Pioneers (1-3). Lee and Vogels will handle the broadcast on ESPNDecatur 1050 AM, with pregame set for 1:30 p.m., and kickoff at 2.

The Chicago Bears (3-2) are on their bye week, but will return next week to host the New Orleans Saints on ESPNDecatur.