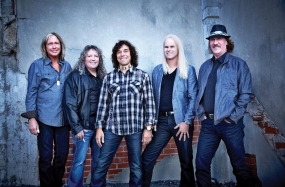 Head East, which traces it’s roots to East Central Illinois, remains best known for their hit “Never Been Any Reason”, plays the 9:00 p.m. concert on the Show Stage (Franklin and Eldorado), with country rap duo Moonshine Bandits as the opening act at 7:30pm.

Earlier Show Stage acts feature the Opening Ceremonies at 6 p.m. and Neuhoff’s own DJ Tat and DJ Suave at 5pm.

The Christian Stage (Main and Water) will have Pjae & Living Sacrifice for a pair of shows at 7pm and 9pm.

The first night of the BlueRock Record Battle of the Bands will start at 6 p.m. on the North Street Stage (Water and North) AND the addition of a second stage at North and Water. The Central Park Stage has the Decatur Power Tumblers at 5  and Ees’aBella Belly Dancers at 7 o’clock.  Central Park will also feature Indie Folk Duo Arbour Season at 9pm.

Country, rock and top hits band Wreckless Chelsea will take the Cabaret stage (William and Water) at 5 p.m., followed by a pair of shows with glam/ modern rock band “Lenny and the Lamplighters  at 7 and 9pm.