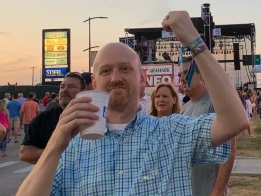 Garner was one of 20 finalists to participate in the Land of Lincoln Credit Union Celebration 365 Contest with NowDecatur.com. All 20 finalists lasted the entire year wearing their daily accessory, earning them a pair of the $50 VIP Pit Pass Wristbands, while Garner claimed the Grand Prize of $1,000 and a pair of $100 Rock Star VIP Wristbands. Garner joins Krystal Sturgeon on the list of winners, as Sturgeon won the same Grand Prize a year ago.

Where all did this little piece of Decatur travel? Highlights included many trips to Disney, six went into surgeries, for the second-straight year a DC wristband left the country (to Canada with Phillips), and three graced the wrists of bridesmaids, but the feature act, was when a wristband helped hold a bridal bouquet in place in Florida, at the wedding of Andi McCoy-Galloway, and her husband, James.

“We want people out there being positive and promoting the Decatur Celebration year-round,” Contest Organizer Aric Lee said. “The fact we’ve sent one DC band down the aisle, two to different countries, and especially 40 of them into the lives of Decatur people that love the festival, is icing on the cake.”

Friday afternoon on, ‘The Aric Lee Show’, the new season began. 20 new finalists were drawn for the upcoming year, and will be fitted for their new bands on Sunday afternoon, when the contest clock officially begins.

To follow the contest all year long, all are invited to join the Facebook Group: Celebration 365 Contest w/ NowDecatur.com.