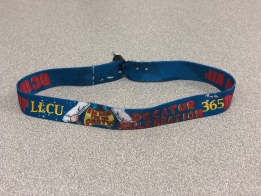 July 30  –  For nearly 365 mornings the 20 finalists chosen last August for the Land of Lincoln Credit Union Celebration 365 contest have woken up with the same #DC18 wristband on their arm.

Thursday morning will be their final morning with that very familiar accessory.

The winner of the contest claims the $1,000 Grand Prize, along with a pair of $100 Rock Star VIP Wristbands for this year’s Decatur Celebration, and be invited to ride in the Razzle Dazzle Good Times parade on Saturday morning … but the remaining 19 won’t go home empty-handed. Just for lasting the entire year, each will receive a pair of $50 VIP Pit Pass Wristbands for this year’s party.

Decatur Celebration Producer/Director, Jarrod Cox said it was way to fun of a promotion to end after two years, so Celebration 365 Year Three, is officially underway.

To sign-up for the drawing to receive a #DC19 Wristband Sunday afternoon at the Celebration, everyone MUST SEND AN EMAIL to: AricLee@NeuhoffMedia.com. Each email will be returned with a short survey, with rules and understandings of the contest, and the 20 new finalists will be drawn by the weekend, and all 20 will meet at the Civic Center on Sunday.