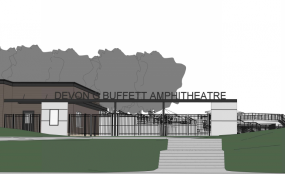 March 15, 2019- The Decatur Park District has announced the addition of a partial list of headliners for The Devon G. Buffett Amphitheater.

Season tickets will be on sale for the 2019 season for a limited time from Monday, March 18th at 10 a.m. until Friday, March 29th at 5:00 p.m. Season tickets include the full season of at least 22 shows produced by The Devon including headliner acts .38 Special, Wynonna Judd, Leonid & Friends and Brian McKnight, plus $5 Friday Series, Tribute Series and a Christian Day featuring Jordan Feliz. Additional headliners will also be announced as they are confirmed.

“We’ve worked hard to secure a quality line-up while keeping things as affordable as possible for attendees,” said Mike Wilcott, General Manager of The Devon. “With the full season having at least 22 shows, the price for a lawn season ticket averages just over $10 per show.”

Season tickets will be available by calling the Decatur Park District office at 217-422-5911 or in person at 620 East Riverside Avenue from 8 a.m. – 5 p.m. Monday thru Friday. Single show tickets will go on sale April 5th and can be purchased online at www.devonamp.eventbrite.com.

5/24/19 (opening weekend) – .38 Special – NEW HEADLINER These southern/classic rock icons have had several multi-platinum, platinum and gold albums and over 20 million albums sold in their career of touring over 40 years.

5/25/19 (opening weekend) – Wynonna & The Big Noise – NEW HEADLINER Wynonna Judd has had 4 Grammy nominations as a solo act and has had 5 platinum albums as a group, this country star has had 11 top 10 albums on the country charts and 5 number one singles.

5/26/19 – (opening weekend) – Forever Motown, A Tribute to the Music of Motown national touring act, played to sold out crowds across the country

6/7/19 – $5 Friday Series: Wedding Banned (based out of Chicago, IL) this group is a fan favorite wherever they play and was recently voted #1 wedding band by CBS Chicago. They play a mix of popular songs from 80’s, 90’s and today.

6/19/19 – The Decatur Municipal Band 6/21/19 – Heartache Tonight, A Tribute to the Eagles this national touring group has been recreating the Eagles’ show for fans of all ages for over 15 years.

7/26/19 – $5 Friday Series: The Breakfast Club Chicago based group playing all fan favorites from the 1980s while also wearing outfits fitting of the era.

8/10/19 – Chicago 6 This group featured three members of the 1985 Super Bowl Champion Chicago Bears; Dan Hampton, Steve McMichael and Otis Wilson along with three other talented musicians to play popular songs of the 1960s, 1970s and more. In honor of the Bear’s 100th season and their Decatur Roots, this show is the perfect way to kick off the football season.

9/13/19 – $5 Friday Series: No Alternative based out of Chicago this band pleases crowds with spot on performances of rock and pop hits from the 90s and early 2000s.

9/20/19 – Comedians Brad Upton and Troy Davis Brad went viral last year with some of his stand up clips from Dry Bar Comedy on multiple social media platforms. He has spent most of his career performing in the Pacific Northwest while raising his kids and being a 4th grade teacher. This clean comedian, has performed over 3400 shows in his career. Troy Davis is an Indiana native that has spent over 15 years touring comedy clubs all across the Midwest. His approach to real life situations from a different perspective provide plenty of laughs.

Talent is still being confirmed for the 2019 season.

Listen to the podcast now!