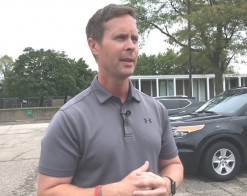 November 26 – With the holiday over and the elections in the rearview mirror, lawmakers in the nation’s capital are getting back to work. A central Illinois congressman says one thing we can expect soon is a farm bill.

The new farm bill that will replace the one that’s expired is in conference committee to combine the House and Senate versions. One important component of the bill is how to reform the Supplemental Nutrition Assistance Program, or SNAP.

Amelia Kegan with Friends Committee on National Legislation said the group opposes the House version that would peel back waivers for states to get out of the work requirements for those who get food assistance, despite a booming economy. Kegan said lawmakers should instead address barriers to employment.

Congressman Rodney Davis, said that’s what they’re trying to do. “No one is saying we’re going to take benefits away from folks,” Davis said. “We’re actually saying folks who are on benefits and stuck in that cycle of poverty, let’s give them training dollars.” Davis said there are already requirements for able-bodied, single people to try to get a job while getting SNAP, but states like Illinois have been getting waivers from those requirements based on unemployment rates and other factors.

Davis wants to address work training for those on food assistance on the conference committee tasked with merging the House and Senate versions of the bill. He says the farm bill will be a top priority before lawmakers end of the year and the new Congress takes over.

Illinois Farm Bureau National Legislative Director Adam Nielsen said the bureau doesn’t have a position on work requirements for those who use food stamps, and that it’s frustrating that it’s one of the sticking points in getting the bill across the finish line.