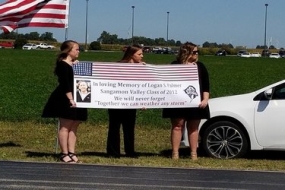 November 16 – A resolution to rename the Harristown post office in honor of Petty Officer Logan Palmer awaits President Donald Trump’s signature after it passed the Senate by unanimous consent on Thursday.

“We are one step closer to seeing the ‘Logan S. Palmer Post Office’ in Harristown,” U.S. Rep. Rodney Davis said in a statement. “I am very happy my colleagues in the Senate unanimously passed this important legislation to honor one of America’s heroes.”

Davis introduced the resolution, H.R. 5935, in May and it passed the House on September 13. It officially designates the United States Postal Service facility located at 1355 N. Meridian Road in honor of Palmer, who was among the sailors killed last August when the USS John S. McCain collided with a tanker off the coast of Singapore.

“Designating this post office will not only honor Logan’s service, but also serve as a grave reminder of risks that our service members take on each day and the responsibilities we have to them as a country,” Davis said. “I was honored to sponsor this legislation and I look forward to President Trump signing this bill into law soon.”