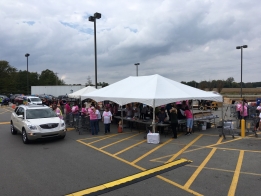 October 5 – Kevin Breheny vividly remembers a chilly November weekend in 2002 when the WSOY Community Food Drive made its debut in the parking lot of the Kroger grocery store on East U.S. 36 in Decatur.

“It was very cold. It was right here. We had a little hut and a fire going,” said Breheny, president of J.L. Hubbard Insurance and Bonds. “We did it for two days, Friday and Saturday.”

“It’s just amazing. Who would’ve ever thought that we’d be raising 1,500,000 pounds of food? We hope to do it two years in a row, we’re getting close,” Breheny said as the 17th annual WSOY Community Food Drive pushed its total to 1,226,333 pounds with three hours remaining.

“People got on board; it just grew over the years and gained momentum. We’ve just got to keep doing it and taking care of those who are hungry.”

Breheny, who helped co-host during the 12-hour broadcast on WSOY, said he was privileged to be a part of the event.

“This community is just phenomenal, and I think people have just gone out of their way this year to make this a success. It’s busier than I’ve ever seen, the donations are more. The institutions are coming up with bigger gifts.

“People love this community and they want to take care of those who are in need.”