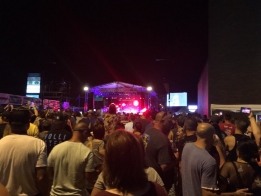 August 6 – The final numbers will take some time to complete, but organizers of the Decatur Celebration hope large crowds for the major acts will result in strong attendance figures.

“I definitely don’t guess,” said director/producer Lori Sturgill. “However, I was really impressed with the crowds at both the T.I. show and the Crowder show. The Gretchen Wilson crowd was huge as well, and Daughtry.”

Sturgill said it will take some time before all the pre-sales, online sales and point of entry sales can be fully determined.

“It’s not something we can get a quick number on, so it will take us a little time to pull in all the sales and total everything up,” she said.

Sturgill said that many of the food offerings proved quite popular, noting the “tat-chos” sold out every night. The cookie ice cream sandwiches, jar bar pineapples, turkey ribs and soba noodles were big hits.

“We’re definitely a food festival,” she said. “I keep telling people we were a food truck festival before that was cool.”

While the Celebration dodged precipitation, high temperatures did suppress the daytime crowds.

“It’s tough to get people to come out during the day when it’s in the 90s and humid,” said Sturgill. “If it’s hot and it’s humid, people wait until later in the day to come out. We’re so susceptible to the weather like any other outdoor event.”