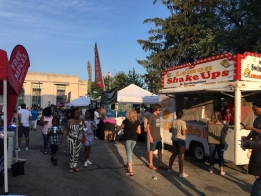 August 5 – Once the last act has left the stage and the Decatur Celebration crowd has cleared the grounds, the task of getting downtown back to business gets underway.

“As soon as it’s done, the process begins,” said Spike Queary, the Celebration’s operations manager. Queary estimated he will have about 50 to 60 volunteers helping break everything down.

“As soon as everything is done and we get everybody safely off the streets, make sure the grounds are safe, then we’ll open the barricades up,” he said. “At that point, vendors can come in and start breaking their stuff down.

“We’ll start breaking all of our stuff down, beverage booths, ticket booths. The city’s also in there and they start part of their cleanup as far as getting all the trash.”

Queary said the crews will have everything cleared from downtown by around 2 or 3 a.m. Monday, and have everything returned to the storage facility by 8 or 9 o’clock. He said that the Decatur Police Department will be in charge of reopening the roads, but that should happen by around 4 or 5 a.m.

“Sometimes it’s a little bit sooner,” he said. “It sometimes depends on what kind of progress we make.”